Giving Back to Japan

A few days after the disastrous events of March 11th, I sent out an email to the members of the board of the Netherlands Chamber of Commerce urging them we do something, something to help the people of Tohoku. As a NCCJ board member and long-term resident of Japan I felt that this voluntary network organisation would be the best way to find ways of helping. A few board members, including Hans van der Tang, the future NCCJ president and Leon Halders from DSM president of the NCCJ at the time, we met less than a week later in a cafe in Shibuya. Regularly shaken by aftershocks, we quickly decided that we should divide our ideas into short term and long term plans. Our longterm goals would slowly materialise into the Orandajima House, but at that time in that Shibuya cafe, we thought we should also focus on what we as a chamber are best at: bringing people together. We decided we would organise an event, we called it: Giving Back to Japan. The main purpose for the first event was to provide NGO’s and other organisations that are contributing to the relief efforts following the earthquake and tsunami with a platform to explain their various relief efforts in the region.The event was sponsored by the Mandarin Oriental Tokyo Hotel and Unilever. We collaborated with various national chambers of commerce in Japan. The event was a succes, over 200 people participated and apart from a better awareness about the NGO’s activities, ¥675,000 was raised for charity. 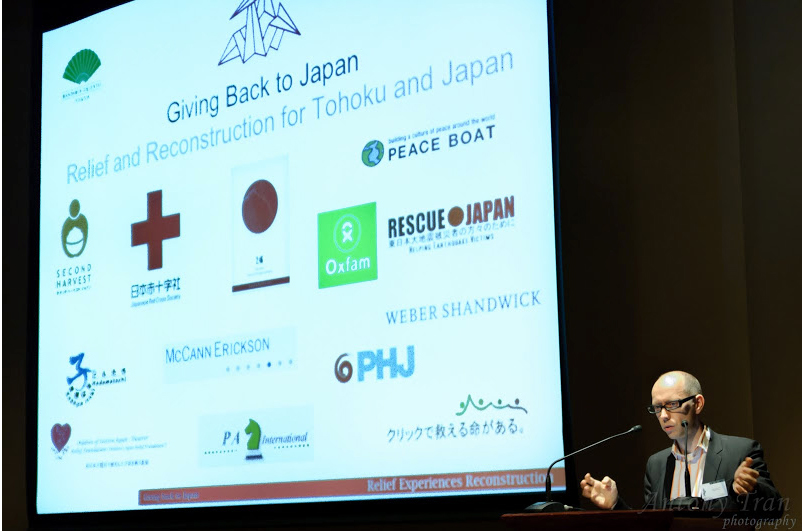 About a year later the NCCJ organised another Giving Back to Japan event: Community Leaders report. This time the focus was to provide a public forum for the mayors of cities and towns across the region of Tohoku whose community are facing different reconstruction issues. We invited five mayors from the towns of Aizu, Iwanuma, Ofunato, Onagawa and Yamada machi to talk to an audience of over 400 members from 16 national chambers of commerce. Tv and radio presenter Peter Barakan led the discussion about the struggles and effort these small communities are facing and how individuals and organisations can help toward their goals.

Here’s video of Peter Barakan and me, talking after the event.

Giving Back to Japan 3: The Road to Reconstruction

On March 11th 2015 there will be a third Giving Back to Japan event: The Road Towards Reconstruction. For this event the NCCJ is collaborating with the Canadian Chamber of Commerce and again many other foreign chambers. The focus, as described in the subtitle, will be on realised projects. I will talk about our Orandajima House. You can read more about this project which I designed pro-bono down here on this site. During the presentation I want to focus on the process of design as well as construction. It will also be a good time to thank all the companies that have sponsored the many products that were used in the building such as the lighting, finish materials and furniture. The event will be held at the Tokyo American Club, you can find more details and also register here: http://www.nccj.jp/events/upcoming-events/details/182-gbtj3

Please join, it’s for a good cause, for each paying guest ¥1,000 will be donated to support Tohoku Reconstruction Projects.